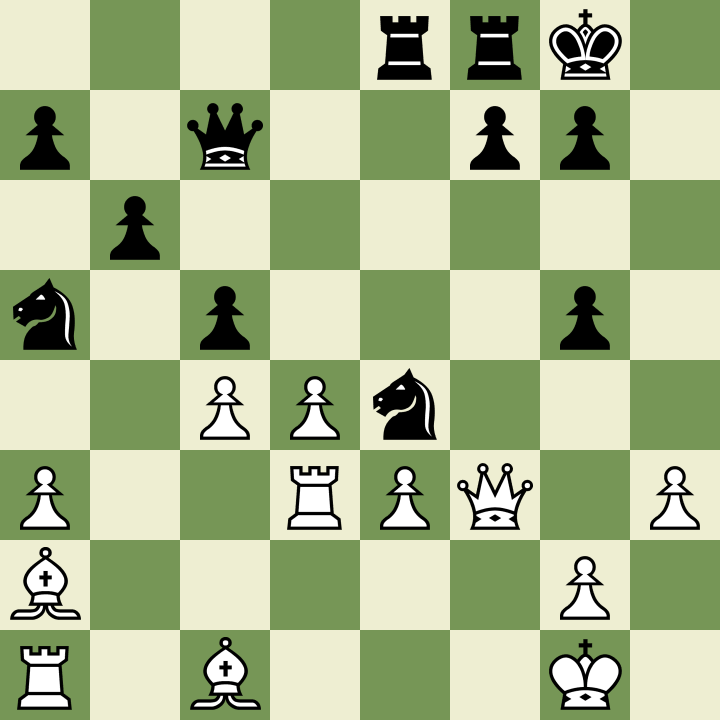 Anything in bold are black ideas.

1 – Bishops v. Knights – “It’s more open because not a lot of pawns are locked up but both Bishops seem completely useless. The Knights are clearly superior – the Ne4 especially. White’s Light squared Bishops is caged and maybe can find some future on the Kingside.” I think this position is semi open generally favoring Bishops however in the current situation the Bishops are struggling. Bc1 is a bad inactive Bishop. This needs to be fixed. One idea is to play d5 and Bb2 to give it an open diagonal. Another idea could be to get the Bishop to the h2-a7 diagonal via d2,e1 but getting g3 might be tricky considering Black’s control over it. White Ba2 is a good inactive Bishop. Technically it has a job of guarding c4 however this isn’t an ideal lifestyle. It would be much happier on a square like d5 doing the same thing while also applying pressure to Black’s camp. Perhaps it should find a way to drop back to b1, move the Rd3 and trade off for Ne4 if it can’t find a way to get active. Black’s Ne4 is better than any Bishop on this board. The e4 square is a wonderful home that paralyzes White’s center and is ready for anything. Black’s Na5 isn’t the happiest square in the world but it is mostly secure on Black’s 4th rank applying pressure to the c4 pawn and keeping White’s Ba2 tied down to its defense for the time being.

Space – technically White has more space on the Queenside (d4 and c4 v. c5) and in the center (e3 and d5 v. nothing.) Black has more Kingside space technically because of the g5 pawn. However this being said – the main thing Space gives it’s owner is more mobility for their pieces and less for the opponents but if anything it’s White’s pieces that feel restricted because of the cramping nature of White’s Bishops. White can gain more space and a passed pawn by playing d5 but it does close the position more in favor of Black’s Knights. Black could gain more Kingside space by playing f5 which also engages the Rf8 and reinforces control over the outpost on e4. This might be risky opening up White’s King but it’s hard to see anyway for White to capitalize on this. White has the superior pawn center and that informs Black that he should seek to destroy it.

Pawn Structure – White has 3 pawn islands. The isolated a pawn doesn’t seem easily targeted. Black has two pawn islands but no specific types of pawns. White can create a passed d pawn by playing d5 and give Bc1 a new hope on b2 but at the cost of closing the position more for Black’s Knights. Black could change the pawn structure by playing cxd4 but this opens the position in favor of White’s Bishops and the resulting hanging-ish pawns on c4 and d4 seem more favorable for White than Black.

Development – It seems that if anyone has a lead in development its Black because of the highly inactive nature of Bc1, Ba2 and Ra1. A move like f5 activates Black’s only inactive Rf8 immediately so Black does seem to have a slight lead in development. This could indicate the right to launch a quicker attack and pressure to convert this short term advantage into a long term one.

Initiative – No side seems to have any immediate threats on each other but if Black plays cxd4 it seems to come with the additional threat of Nxc4. Can White gain enough compensation by the open nature of the position with his Bishops after losing this pawn? Is there a tactic availa”ble?

Control of key files – “Black has two half open files on e and d and White has two half open files on f and b” How much does these files matter? “If Black puts pressure on the half open d file it would pressure White’s d4” If White does play d5 (a move that has plusses and minuses it would negate all pressure on the d file. I think Black’s e file is more important to control because of the importance of maintaining Ne4 as well as the potential target on e3 that can’t be covered up so easily because defending it another White pawn seem very unrealistic.  “What if we made Alekhine’s gun on the d file and (while supporting moves like g6 and f5 keep the Ne4 and Kingside under wrap) play a sacrifice like b5 to weaken d5 and win it?” I like that you are already looking for plans however we should finish the steps to determine if this is indeed where we should be focused. White’s half open b file leads to the b6 pawn which isn’t not about to be undermined so is therefore useless. White half open file might be very useful if White is the one keeping dominance over f5 square but even then it’s hard to imagine White putting enough pressure on the f file that Black couldn’t easily handle. “Black also has half open h file”

Control over weak squares – White has the weak square g3, e3, e4, c3, c4, b3, a3 and a4 A LOT! But do any of these squares matter? The vast majority of these are located in the center and on the Queenside. Black already has domination of the e4 square and pressure on c4 and b3. More pressure could be applied if we put pressure on the d file. Black also better control over g3. Black can gain enough more control over e4 by playing f5 and g3 if he ever wants to play f4. Black has weak squares on a6, c6, d6 and d5. White has control over d5 however doesn’t seem to be able to put any pieces on that square and there’s no Black targets there. The same goes with d6 and a6. So White’s control over those squares don’t seem to matter.

Dynamics v. Statics – White can open the position more by playing dxc5 which would benefit the Bishops but voluntarily destroy his own center, weak his pawn structure terribly and stop all chances of if creating passed d5 pawn possible advantage.

2) What side of the board to play on? White’s main advantages are superior pawn center and superior center/queenside space, the ability to create a passed d5 pawn (but it can easily be blockaded by Nd6 so I’m not sure how advantageous this is. Black’s main advantages are kind of everywhere. Black has a beautiful Ne4 with more space currently on the Kingside and more space that can be gained by f5. Black has pressure on c4, the possibility of gaining a pawn by cxd4 unless White plays the ugly Rxd4 and a ton of weak squares on the Queenside. Black also has a lead in development/piece activity that is taking aim at the Kingside/center so Black should first and foremost consider quick pressuring dieas against that area. Black should look to play wherever but I think center and Kingside calls out the most based on current placement of Black pieces including ideas like f5.

3) If we play for a Kingside attack then it needs to be based around a pawn break. The two possible pawn breaks are g4 and f4. It seems logical to but Black’s Na5 to d6 via b7 to blockade any potential passed d pawn as well as support it’s brother on e4. Black also would want to play f5. If we are playing for a g4 break then having a Rook on h6 which could get there via e6 seems ideal. Also, a Qh4 would be great but this seems too unrealistic. We could also play g6 and Qh7 before g4. “f4 is difficult because of White’s control but might be worth looking into” For the sake of time let’s just look at playing for g4 because it’s more destructive to the Kingside.

White trades off both Bishops for both Knights and is successful at mobilizing center pawn majority, passed pawn and space advantage. However this is pretty farfetched.

Based on time we need to skip ahead. A revised position if we can’t trade off is

4) Can opponent stop us? F5 can’t stopped if we play it now, Nb7 to d6 can’t be stopped, Re6-h6 can’t be stopped and g4 can’t be stopped. Seems good. Can White launch a counter attack that is stronger and faster than ours? White’s plan takes quite a while and is still farfetched because if Black plays f5 right now then the Queen never reaches f5.

5) Calculation and evaluation – The candidates moves are f5, Nb7, Re6 and g4. G4 isn’t prepared and doesn’t work tactically. “F5 seems clearly to be the best move because it anchors the Knight and prepares g4.

Here is the game listed below.

We were completely off because we never considered playing b5. Yes this makes sense as it trying to undermine White’s Center however it seems like it opens the Ba2 but it also looks like after cxb5 and c4 that all this gets shut down.

Black played played mostly to create a Good Knight versus Bad Bishop opportunity and played on the Queenside despite all the evidence that suggests Kingside play. Were we wrong?

We looked at the computer analysis with Stockfish 10.

So it would seem that Black came up with a clever idea to play this position but our hard work seems like it was more accurate than the world champions play.

This is the official Summit School of Chess website. It is managed and maintained by National Master Jesse Cohen.