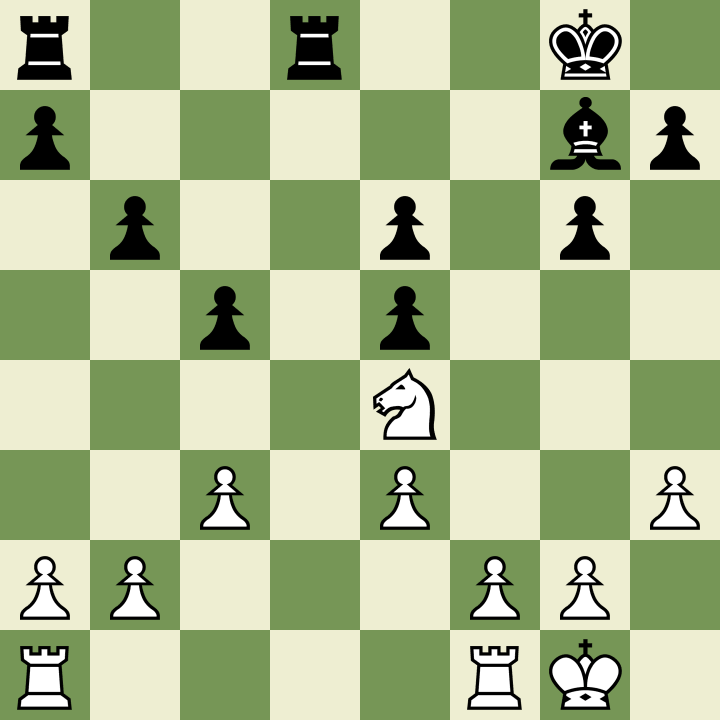 1) Imbalances – list all that exist or can be created.

A) Bishops vs. Knights – Semi-closed center (probably can’t be opened). Black has a Bad Inactive Bishop. It seems the only way to try and help this Bishop AT ALL is to play c4, b4, Bf8, and bxc3. If he plays bxc3 we can try for Ba3-b2 to target the new isolated c3 pawn. If he takes back with Nxc3 then we should have a nice target to attack b2. White’s Knight is active and in a good position. Black seems to have no way of dislodging this beautiful steed. Perhaps white should play c4 to stamp out any hope of Black fixing the Bishop.

B) Pawn Structure – Black has double isolated e pawns. They are potentially weak but it’s going to take some time. (i.e. if White plays Ng5 right now, besides the fact that it can be defended by Rd6 and no new attacker can apply pressure, Black might simply play Rd2 quite happily.) Other than that if White plays for an h5 idea it could change the pawn structure (either hxg6 hxg6 will leave Black with an isolated g6 pawn or if gxh5 and eventual Rh1 the remaining h7 pawn will be isolated on an open file. Other attempts to change the pawn structure might be playing for b4 or a5. Or Black playing for a3, b4, or g4.

C) Material – is even. There doesn’t appear to be any way to sacrifice material for either side for positional compensation.

D) Development – Black is up to one tempo with the Rd8 however it’s White’s move so it’s likely even. No visible way to get ahead in development for either side.

E) Control of a key file – Black has control over the open d file however the only penetration square is d3, but what does this accomplish unless he can quickly double and dominate the file. White can easily play Rd1 to challenge this open file (if we wish) and White’s King easily gets over to e2 to cover the d1 square so control over this open file seems to lead to nothing substantial. What if Black plays Rd5 with the intention to double? It seems like White will play c4 to prevent the time needed for this yet another reason to play c4. Can any new files be created? White might play for h5. White could play f4 but it seems pretty bad helping Black undouble the isolated e pawns as well as provide some free activity to the Bg7 but it does open the f file which would give us access to the weak f6 square. Is this worth it? In reality, the other attempts by White to open the position with b4 can be locked down by c4 and if White plays a4 intended a5 it could be shut down by Black playing a5 although I don’t know if Black wants to lock the position even further with his Bad Inactive Bishop.

F) Control of weak squares. White has a weak square on d3. Black has control over it with a Rook but as we stated early – what does this actually help accomplish for Black other than trying to quickly double on the d file? Black has weak squares on a6, c6, d6, e6, e5, f6, and h6. QUITE A FEW! Can this be taken advantage of? The d6 and f6 squares are already being fought for by Ne4 and d6 can further be fought for by playing Rd1. If white plays for h4-h5 ideas it might open up a file to the weak h6 square (more incentive to do this idea) as well as a4-a5 to open up lines to the a6 weakness. I have more incentive to do the h4-h5 idea because it also comes with the bonus of isolating another Black pawn. If Black tries to stop h4 by playing h5 – it creates an outpost on g5 and then it seems like White can play for g4 open up lines against the new weaknesses created on g5 and g6.

G) Initiative – neither side seems to have any clear initiative.

2) Which Side of the board to play on? Black doesn’t seem to be able to successfully play on the d file too much but might play Rd7 followed by Rad8 but where these Rooks are headed for pressure – I don’t know. Black’s ability to try and expand on the Queenside to fix the Bf8 seems more likely so I say Black is mostly looking Queenside and keeping an eye on the center. White powerful Ne4, as well as the double isolated e pawns for Black and the possibility of creating new open files with weaknesses to attack the Kingside, seem to suggest that Center and Kingside play belongs to White.

3) We took a close look and see that there doesn’t seem to be a way for Black to stop White’s idea of playing for h5. Black also doesn’t seem to have a plan that comes quicker and stronger than ours by playing c4 followed by b5,b4 Bf8. This actually combined steps 3 + 4

5) What moves led to our position? H4, c4, f3 to play Kf2
We decided that c4 would be the right move in this position because of the time-sensitive nature that Black can play c4 himself if we don’t do this immediately. It turns out this move is best but Alekhine’s Rfd1 also satisfies because if Black plays c4 White has Nd6 which will win a pawn despite complications. Alekhine only plays c4 once the Ke7 prevents Nd6.

We can see the plan taken by Alekhine is somewhat similar but mostly different than what we choose. Is our plan wrong?
CONCLUSIONS
We’ve taken some time to look at the position and these are some conclusions we’ve made.
1) White can’t really get away with playing f3 and Kf2 because Black will play Bh6 and Rd3 and have a target to apply pressure against.
2) White needs to get the Ke2 because when we go for our plan Black has options like taking on g4 or h4 and when we recapture (with doubled Rooks on the d file can play Rd1 and force a trade-off of Rooks. One of the main things about White’s plan is that it seems only effective with both Rooks on the board so that we can create enough pressure against newly formed targets on g6 or h7(h6).
3) Black (if given enough time) after we’ve played c4 will play for a6 and b5. This can be problematic for White because if Black is allowed to play bxc4 bxc4 and Rb8 Black finally has achieved a penetration point on b2 that we have trouble stopping and has targets on our isolated a and c pawns. We can stop these ideas by having Rac1 and b3 however we seem to need both Rooks to generate enough pressure on the Kingside – so having one that needs to stifle Black ideas on the Queenside limits these ideas as well.
We mentioned ideas of opening new files for White with a5 or b4 in the imbalances but we didn’t take the time to address them – we probably should have because White ends up playing a5 and creating an open file later in the game which proves decisive.

This is the official Summit School of Chess website. It is managed and maintained by National Master Jesse Cohen.